Model “A” News Magazine, on the Road again submission for Mar/Apr 2021 issue:

North Penn Model A’s – In November, a great tech session was held where many club members got their hands dirty tinkering on their Model A's.  We drove our finely tuned cars to a handful of retirement homes bringing each of them their own holiday parade.  It was awesome to spread holiday cheer on such a beautiful day and see many smiles from the residents who came outside to the sound of our AHOOGA horns. 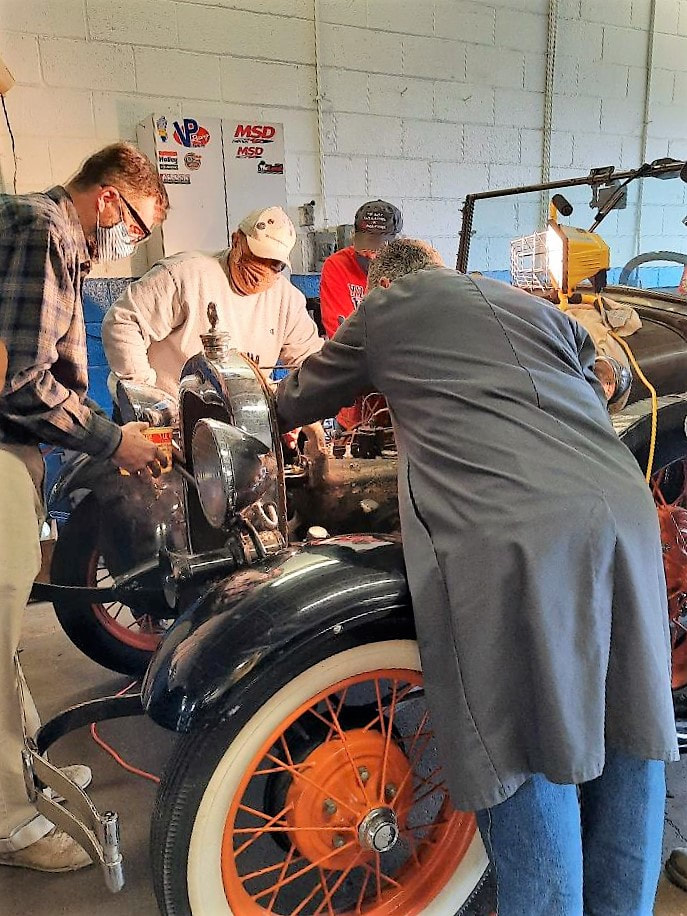 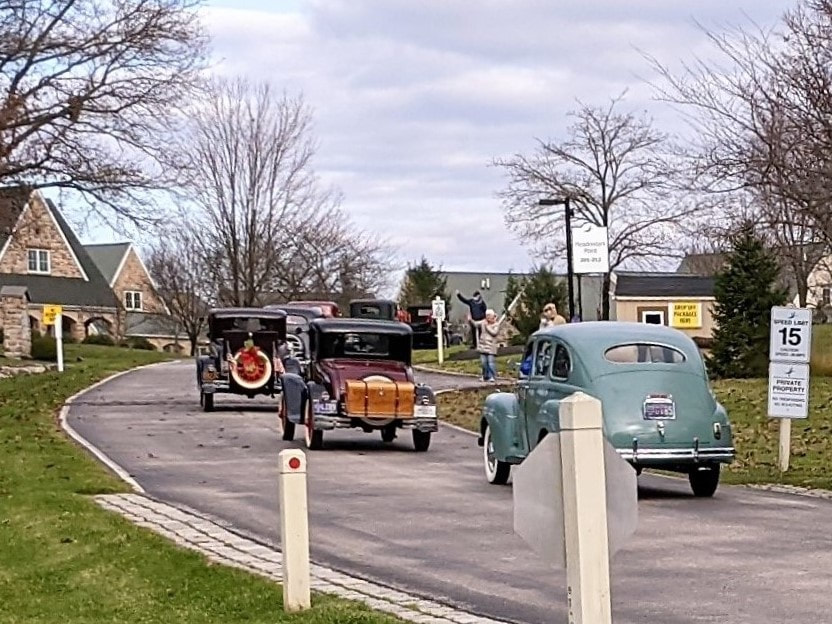 Model “A” News Magazine, On the Road Again submission for Jan/Feb 2021 issue:

North Penn Model A’s – Our October meeting was held at the Classic Auto Mall.  Club members met in Skippack to caravan to the 8-acre showroom that houses a wide variety of cars that satisfies anyone's interest.  For our November meeting, many thanks to Bob for sharing his impressive collection of Ford cars and parts that peaked everyone’s interest.  Additionally, club members drove their old cars there so many impressive cars were seen inside and out. 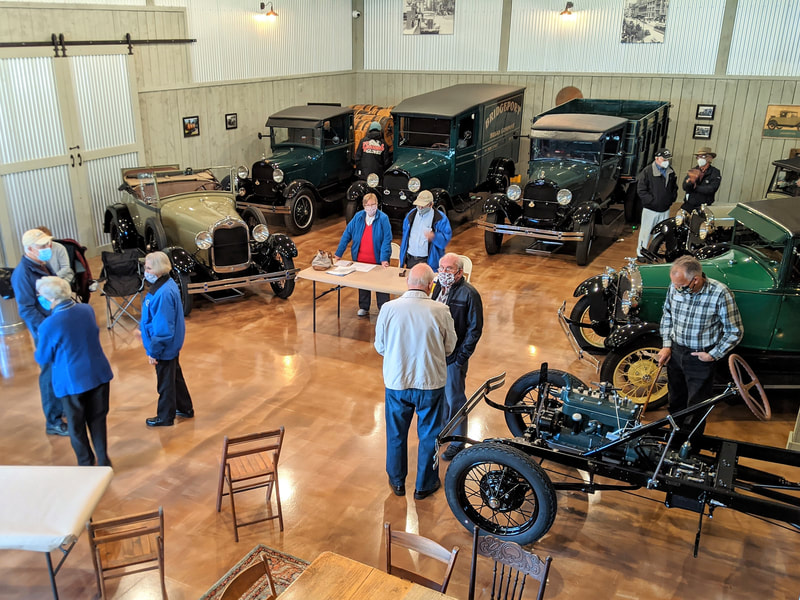 Model “A” News Magazine, on the Road again submission for Nov/Dec 2020 issue:

North Penn Model A’s – In July, we celebrated National Ice Cream day by starting with a winding car tour that traversed paved and gravel roads seeing beautiful old barns and open farmland.  We stopped at the Longacre's Dairy Farm where quickly melting ice cream was eaten at a fast pace without spilling a drop.  In September, our meeting was held at a member’s garage where we viewed a 20 car collection spanning many, many decades. 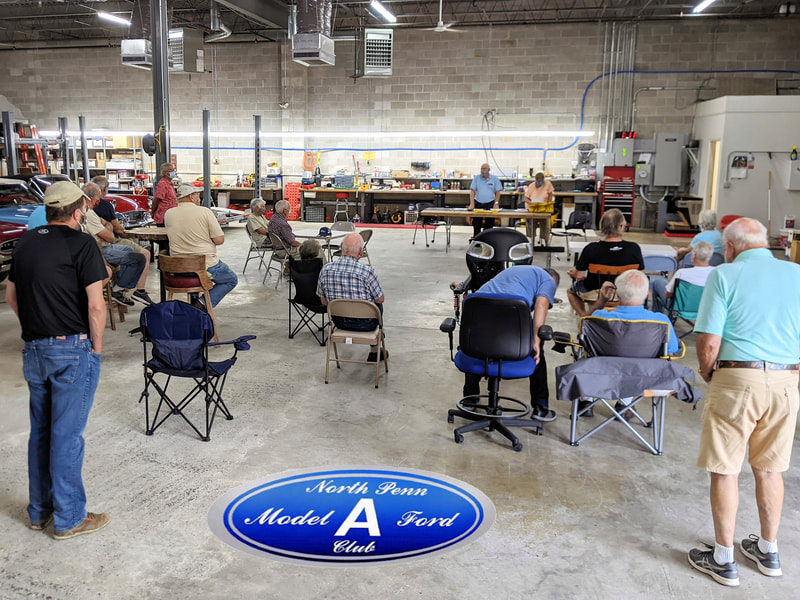 Model “A” News Magazine, On the Road Again submission for Sep/Oct 2020 issue:

North Penn Model A’s – We had an awesome bright spot in July when we were asked to honor Allan, a Vietnam Veteran.  Allan is receiving hospice care and always enjoyed going to car shows.  In coordination with his family, we arranged to bring the car show to him.  On July 4th, we met at the Worcester Elementary School and caravanned to Allan's apartment building.  Allan and his family gathered in the parking lot where they enjoyed the 25 cars that came parading and honking by.  The apartment complex had enough parking spaces where Allan and his family were able to stroll by each car, for their private car show.  All of us gathered to honor Allan for his service then proceeded with singing the first verse of ‘America, the Beautiful’.  We enjoyed the rest of the day by having a socially distanced lunch at Fischer's Park. 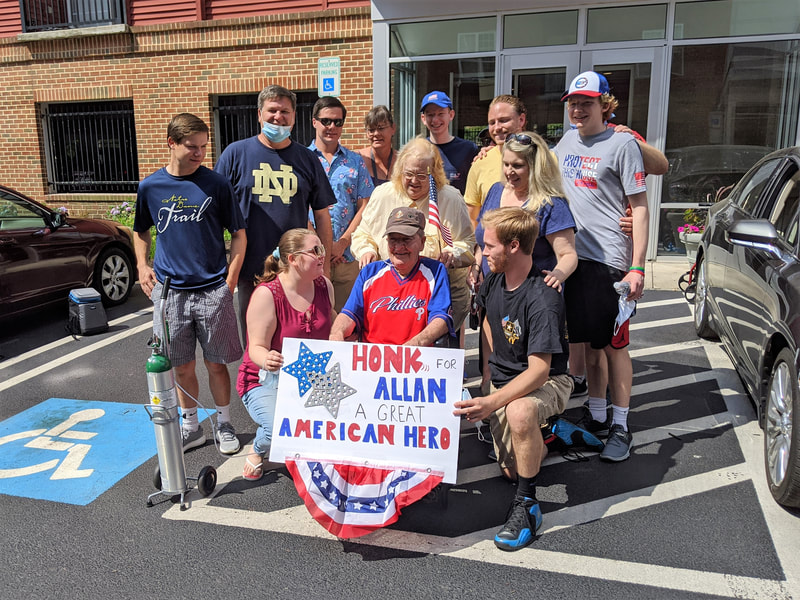 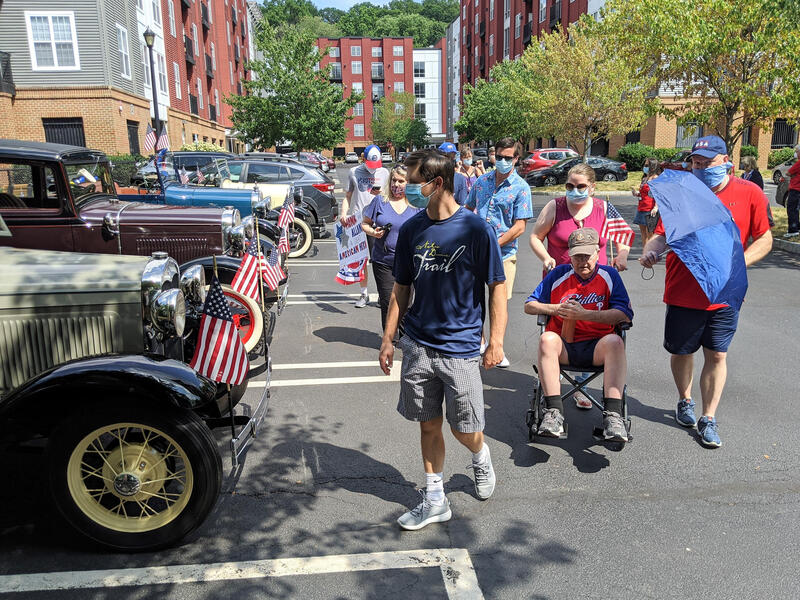 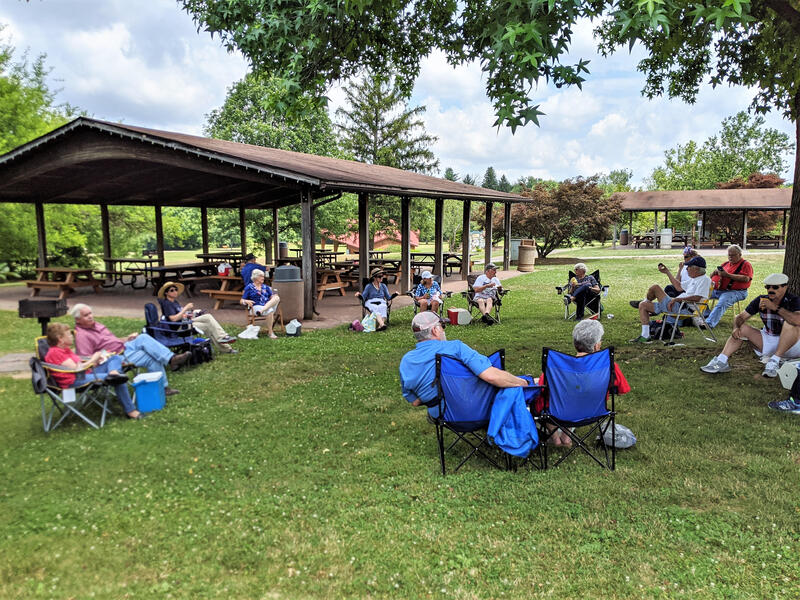 Model “A” News Magazine, On the Road Again submission for Jul/Aug 2020 issue:

North Penn Model A’s – During the Covid-19 restrictions, we thank all those individuals who chose to step forward while others are doing their part by staying at home.  When you do find the need to venture outside, wearing a mask and being mindful of social distancing is most helpful.  With that said, all our club activities are postponed.  However, the stay-at-home order gives us the opportunity to still connect with others virtually.  The Club Officers continue to coordinate with each other to reschedule activities, update the club’s website, pay bills, and are looking forward to when the restrictions are lifted.  Our Club President, Phil continues to keep members updated via email.  As we find ourselves spending a little more time at home, we focus on the priorities of staying healthy, staying connected, and getting through this TOGETHER. 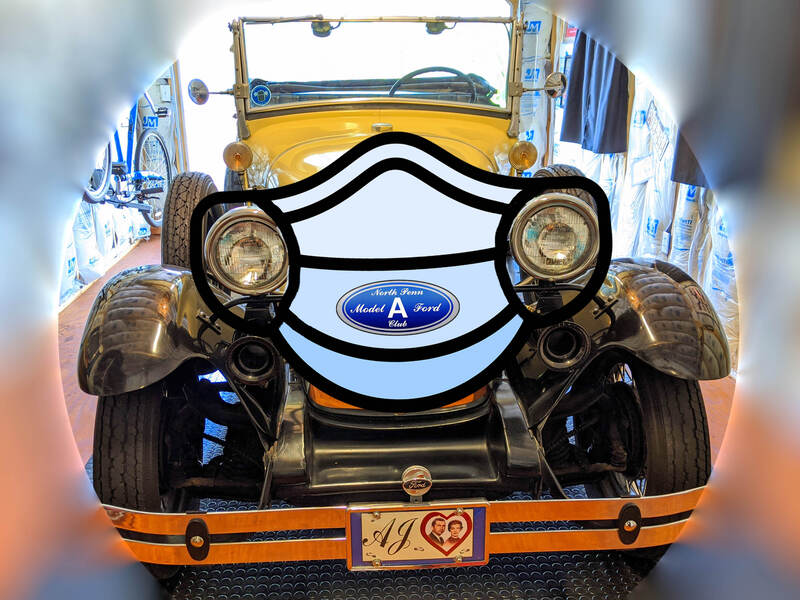 Model “A” News Magazine, On the Road Again submission for May/Jun 2020 issue:

North Penn Model A’s – In January, we drove our Model A’s to a large train display.  The owner has been collecting trains since childhood, which showed, since we spent an hour viewing the numerous trains weaving around skyscrapers, hometown stores, and amusement park rides.  In March, our monthly meeting went on-location driving our Model A’s to a club member’s garage.  42 members started the Saturday morning meeting with coffee and donuts.  We discussed the latest car club business and explored an impressive car collection that consisted of a Model A along with early-modeled Cadillacs and Lincolns.  We thoroughly enjoyed hearing about the history of each car and the various stages of restoration performed.  On a sad note, Ed Roth (Treasurer) passed away unexpectedly.  His zeal for the club and organizing tours will be missed.  We’ll be listening for the faint Ahooga from above as he continues to drive his Model A. 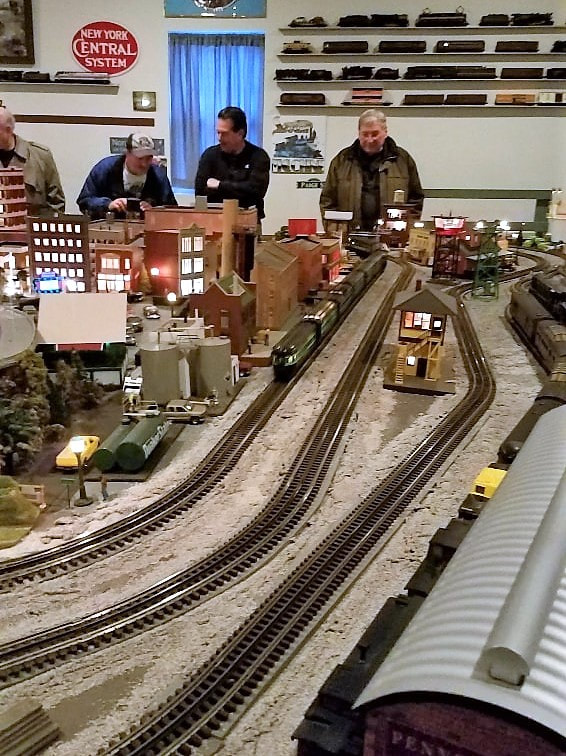 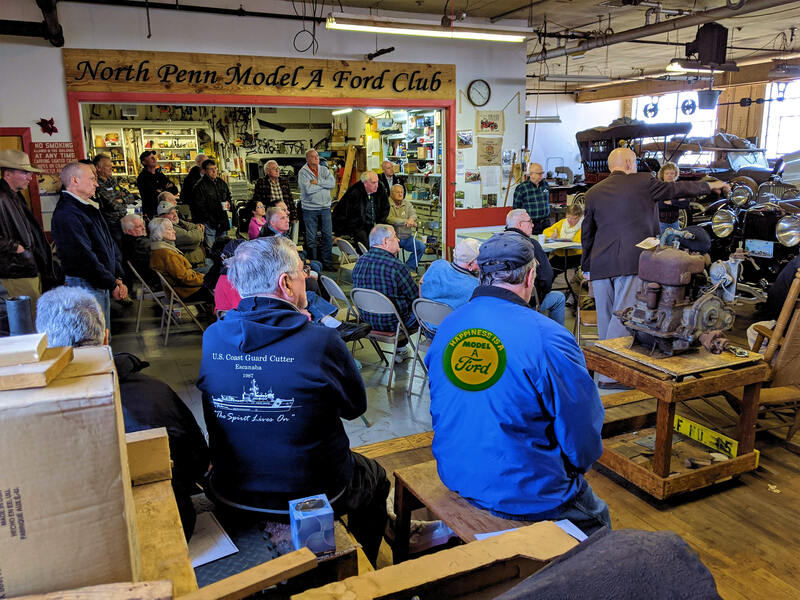 Model “A” News Magazine, On the Road Again submission for Mar/Apr 2020 issue:

North Penn Model A’s – We finished the year by decorating our Model A’s and participating in the November Lansdale parade and the December Souderton parade.  People lined the streets as we ushered in the Holidays.  We started 2020 with our cars lining three club members’ driveways during our progressive dinner tour.  Close to 30 members made a day of it by traveling to each home where we enjoyed a different course at each house;  appetizers, main dish, and dessert.  Also in January, we held our annual Holiday party where 56 members lined up at the buffet enjoying a delicious meal followed by handing out our annual awards for the Most Spirited, Most Helpful, Rusty Wrench, and the President’s Member Appreciation award.  The night ended with a spirited gift exchange where wrapped gifts are randomly selected or purposely taken from other members.  It’s always a surprise when the gifts are finally unwrapped. 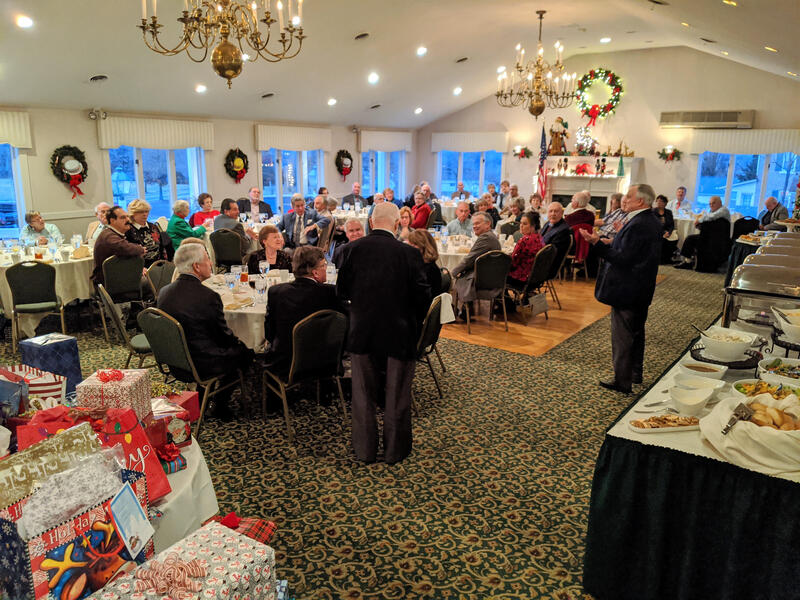 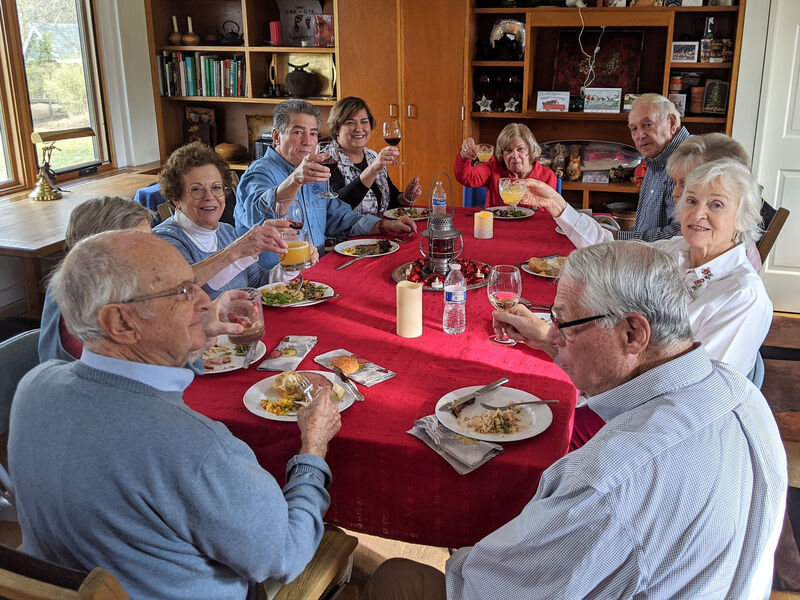 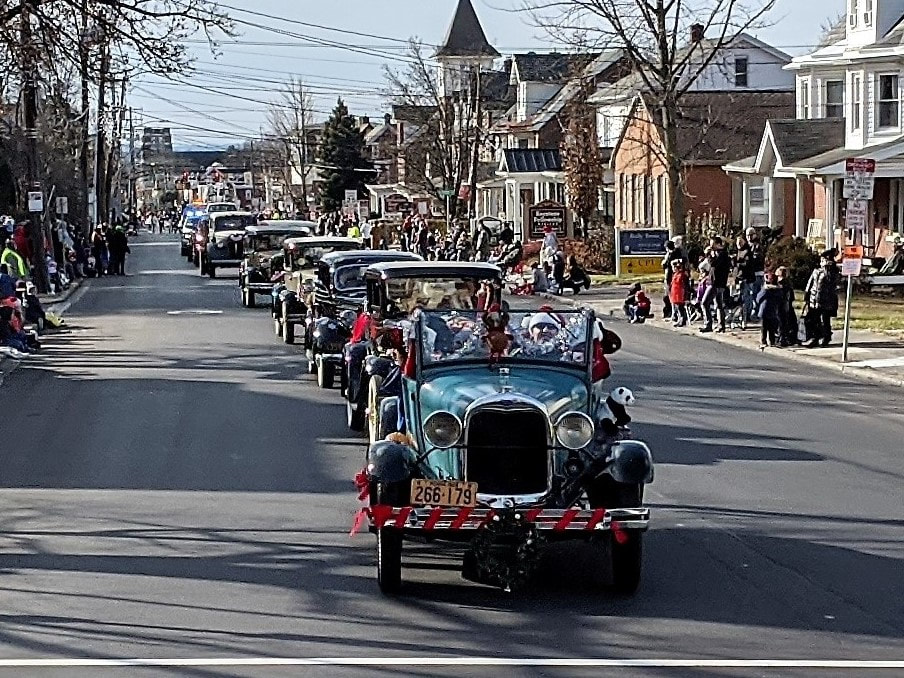 Model “A” News Magazine, On the Road Again submission for Jan/Feb 2020 issue:

North Penn Model A’s – Our Club always looks forward to October’s AACA Fall Meet in Hershey to interact with our Model A friends. We had many members attend and several members set up flea market tables to sell some of their treasures. To highlight, Bob Martino won an AACA Senior Hershey Award for his 1929 Ford Barrel Delivery Truck. The Jack Daniels wooden barrels the truck was hauling definitely attracted many Model A’ers, probably hoping for free samples. Also in October, we participated in the Harleysville Halloween parade with club member, Gary Volpe as Grand Marshall. We grabbed everyone’s attention with our decorated cars, honking our AHOOGA horns, and making many friends along the parade route by throwing out lots of candy. 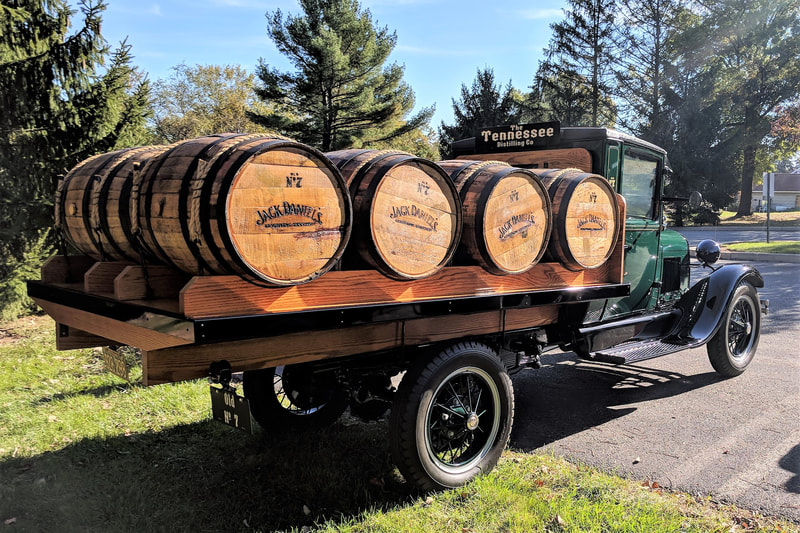 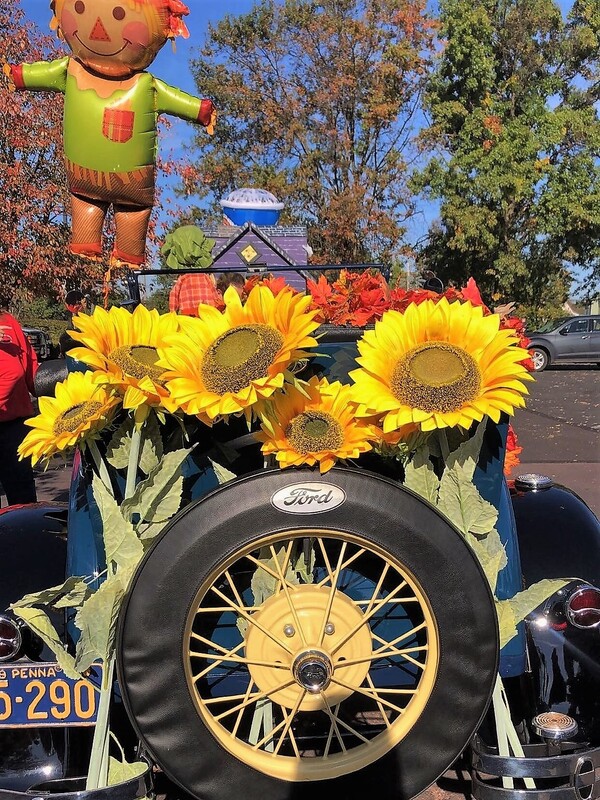 Model “A” News Magazine, On the Road Again submission for Nov/Dec 2019 issue:

North Penn Model A’s –   The sunny weather drew a lot of participants to the Skippack, PA July 4th parade.  Many club members participated and proudly wore their red, white, and blue.  The summer’s agenda continued in August with 55 club members attending the 13th annual breakfast at the Wood house.  Sue and Dave graciously opened their house where we enjoyed a delicious breakfast before heading to the Macungie car show.  To round out the summer, Frank Falcone and Bob Martino attended the MARC National Meet in Dearborn, Michigan.  Bob attended the meet with his Henry Winning Fine Point 1927 Panel Truck and gave a seminar on the early Multi-Disk Clutch system.  What a great way to enjoy the summer. 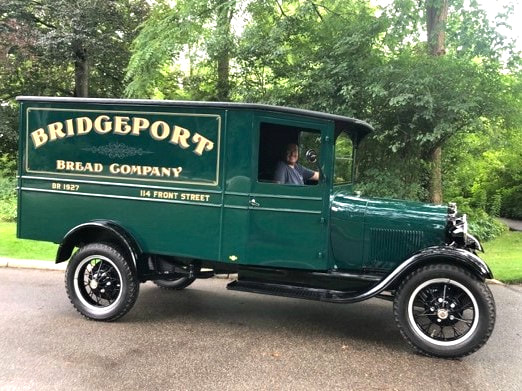 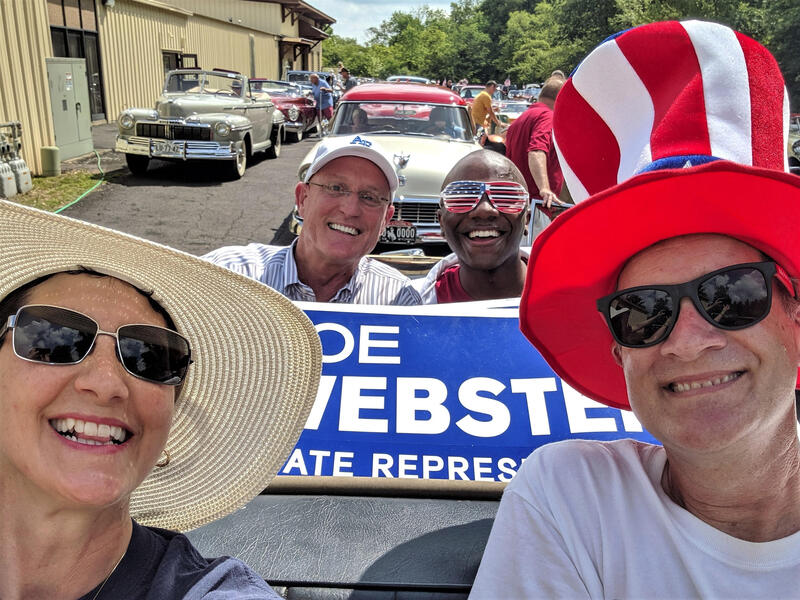 ​Model “A” News Magazine, On the Road Again submission for Sept/Oct 2019 issue:

North Penn Model A’s – In May, we participated in the North Penn High School car show displaying cars from the early 1920’s to today.  The parking lot was dominated by 50+ cars that consisted of 19 various club members’ antique cars and student owned Camaros, Mustangs, and Firebirds to name a few.  Some parents enjoyed the fun also by bringing a couple of Ferraris and a Maserati to the show.  No matter which car the students were standing by, everyone had smiles on their faces.  In June, we had a great turnout with over 50 members at this year’s Club Picnic.  The day started with a sunny hour-long tour on the back roads of Montgomery County before arriving at Green Lane Park.  We enjoyed grilled chicken and hamburgers and finished the picnic with homemade peach ice cream in the park’s pavilion that always brings a smile to everyone’s face. 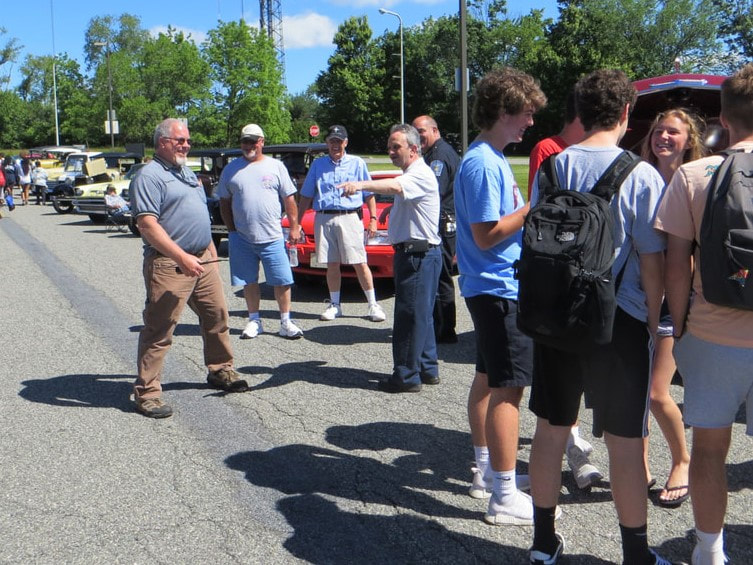 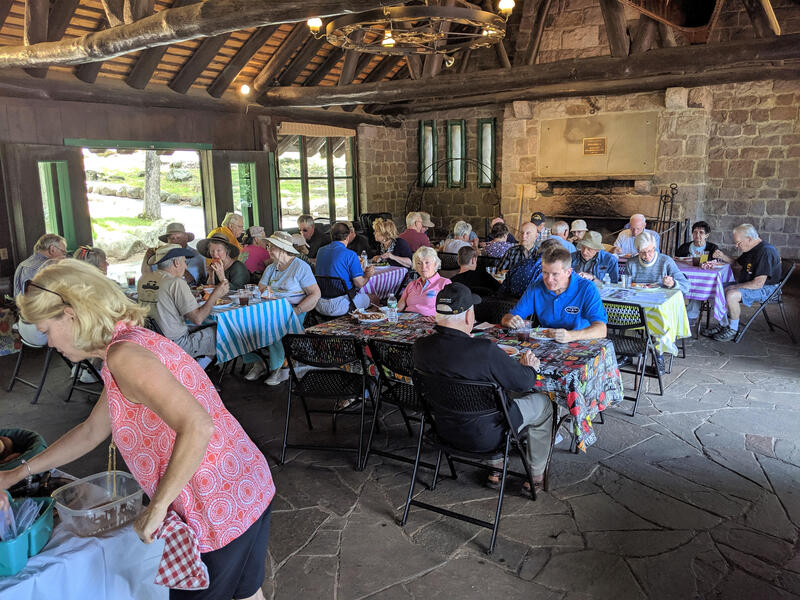 Model “A” News Magazine, on the Road again submission for Jul/Aug 2019 issue:

North Penn Model A’s – Club members went to the Mack Truck Museum in Allentown.  They enjoyed the “Building America” exhibit that featured various trucks such as the 1923 AB model, the 1926 AC model with a Garwood hoist, and the 1937 AC model featuring diesel power that helped with the development of America’s infrastructure.  Mack Trucks, founded by the Mack brothers, build rugged trucks led by its company’s signature Bulldog hood ornament.  Also in May, 42 members attended a Tech Session at Old Forge garage where the focus was on shocks.  While filling up on coffee and donuts, Club members got down and dirty checking car shocks for proper arms and linkage to provide a better ride and handling.  Model A cars may not look tough like a Mack truck, but they continue to soar down the road led by its quail hood ornament. 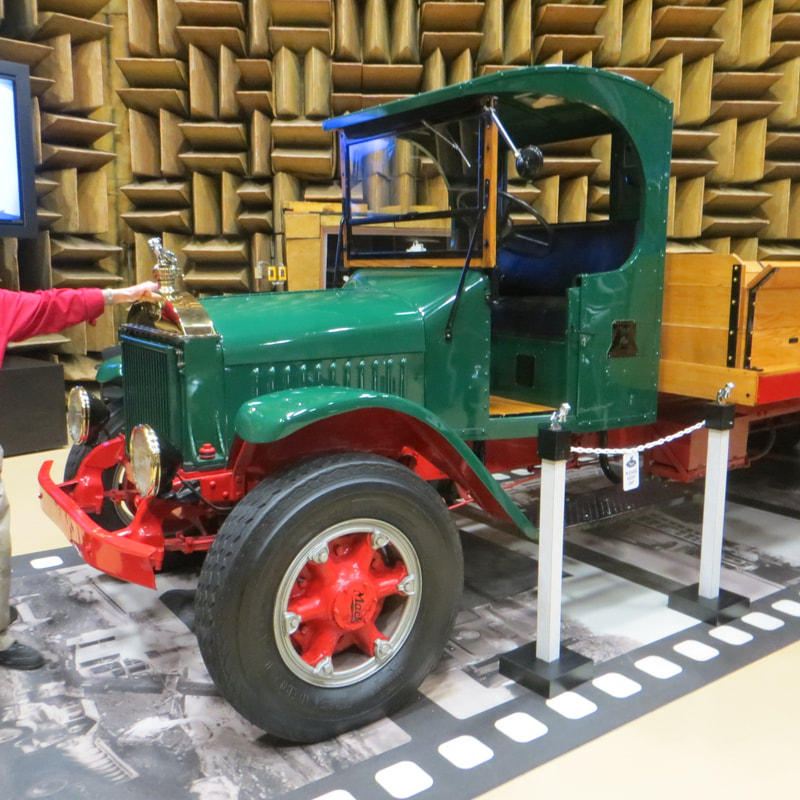 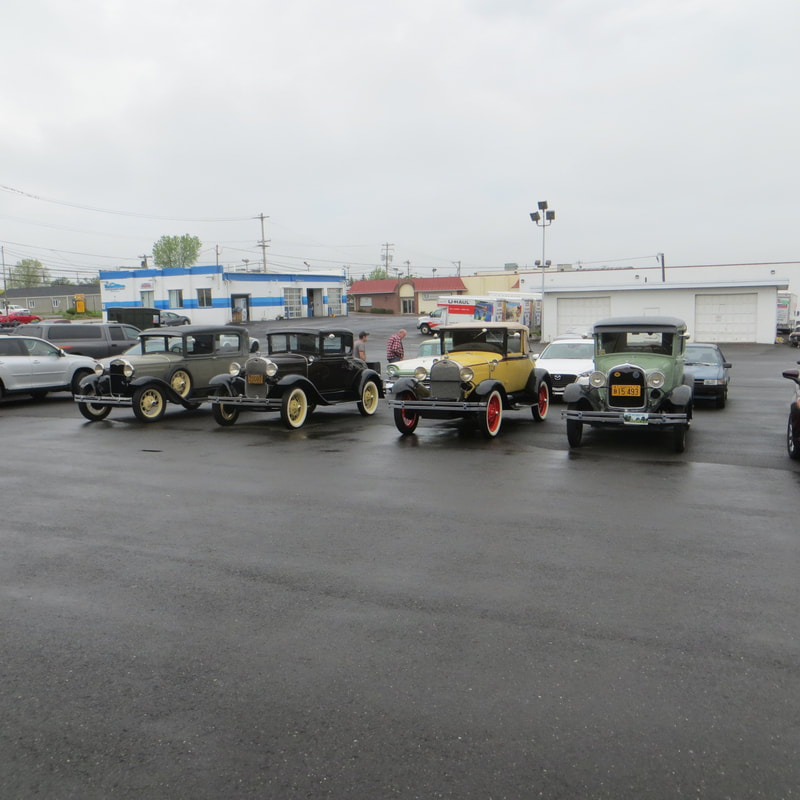 Model “A” News Magazine, on the Road again submission for May/June 2019 issue:

​North Penn Model A’s – We started out the year with a very well attended Holiday Party in January.  Everyone enjoyed the buffet while our annual awards for the Most Spirited, Most Helpful, Rusty Wrench, and the President’s Member Appreciation awards were handed out to this year’s participants.  The night ended with a spirited gift exchange which was fun for the 46 attendees.  The 2019 touring event schedule began in March with our visit to the National Museum of Industrial History in Bethlehem, PA.  The guided tour highlighted the process of making steel at the Bethlehem Steel plant which produced steel for skyscrapers, bridges, and U.S. Navy ships.  After touring the museum, the club members walked outside along an elevated walkway taking in the vast 1100 foot-long steel plant.  It was a sunny but cold day, where the heat from the blast furnaces would have been welcomed. 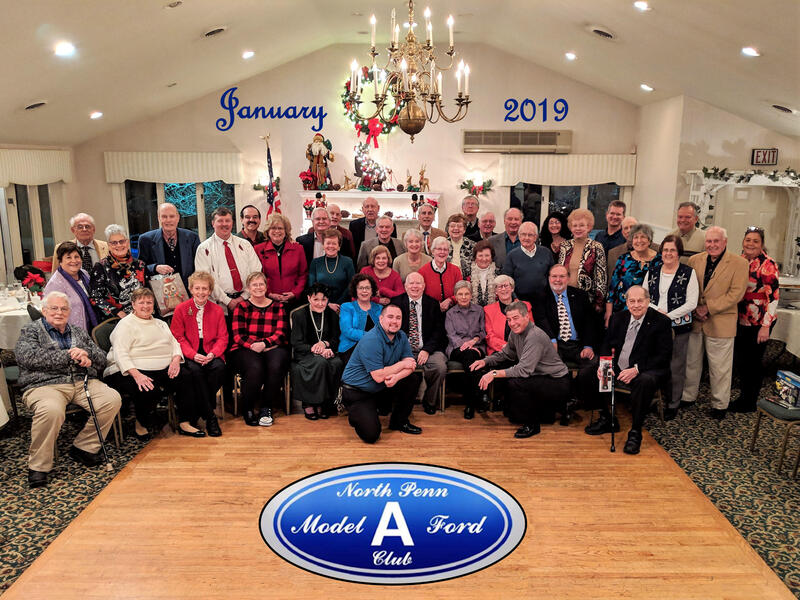 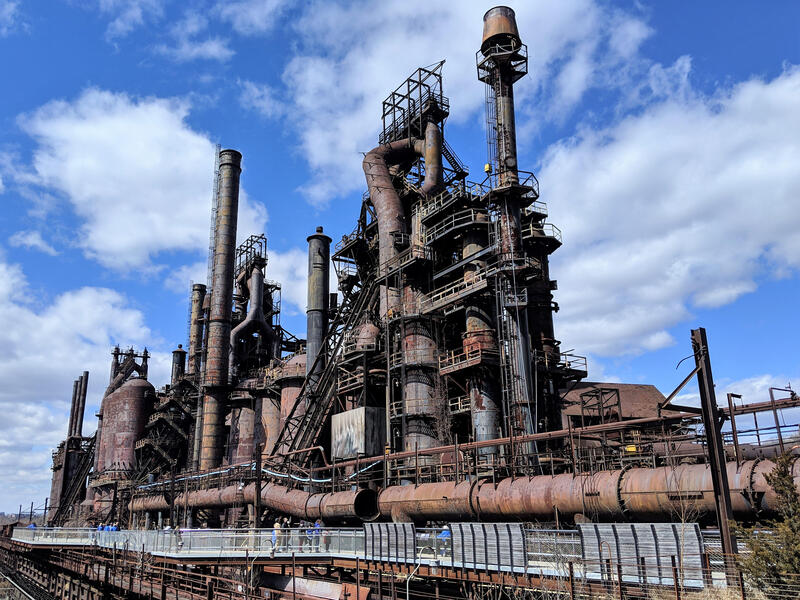